Dr. Savitri Sawhney, a pediatrician who lives in New Delhi, shared her memories of her father, agricultural scientist Pandurang Khankhoje, who was a leader in the Indian freedom movement during his student days at the University of Oregon. He settled in Mexico after his activities during the First World War, the Ghadar revolution and the revolutionary efforts in Germany and Russia. His pioneer studies in hybrid maize, rust resistant wheat and high yielding varieties of soya and Mexican beans sowed the seeds that led to Mexico’s “Green Revolution.” His contribution is honored in a mural by celebrated Mexican artist Diego Rivera.

I Shall never ask for Pardon: A Memoir of Pandurang Khankhoje is a biography written by Dr. Sawhney based on her father’s memoirs. I looked with interest at the photographs you have compiled. I would be very grateful to have my father included in your gallery of freedom fighters. When you read my book you will understand that the Ghadar movement had some ramifications that are virtually unknown. Many of those that took part died before they could pen their memoirs. Unfortunately my father was a very secretive man, (that is why he survived). As to memorabilia, my father was always on the run and did not carry incriminating evidence with him! But (here is) a copy of his Mount Tamalpais Military Academy degree.

The Ghadrites left the USA in such a flurry of enthusiasm and zeal, little knowing that most of them would not survive. Of those that reached India many were caught and executed, some were put in the Andaman Island cellular jail. A few escaped… Sohan Singh Bakhna was jailed and freed at the time of Independence. He lived to become a political leader of the peasantry in Punjab. Many became communists and arrived in Russia. It is a most interesting chapter on Indian history which is being researched. All the original documents we possess are in the Nehru Memorial Museum in Delhi. 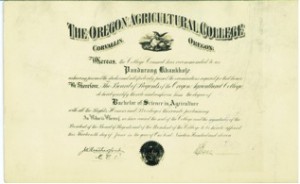 No (lecture) slides (with us). They were confiscated by the British Government.

It is really wonderful to see the interest that is building up about these events. Dr. Sudip Bose served as a physician on the front lines of combat during Operation Iraqi Freedom, providing emergency care to thousands of soldiers and Iraqis during the peak of insurgencies in Baghdad, Fallujah, and Najaf. Dr. Bose also treated prisoners of war, including former Iraqi President Saddam Hussein shortly after his capture. His 15-month tour was one of the longest by a physician since World War II. Dr. Bose, who earned Presidential recognition and The Bronze Star for his meritorious service, and a nomination as a CNN Hero, sent us his story.

War is always horrible but what really inspired me was the good seen in mankind: soldiers giving selflessly to preserve what we have here; acts of courage that surprise you, inspire you; the smile and gratitude of the local Iraqis; even strangers, people that I haven’t ever met going out of their way and sending me care packages and becoming my friends. All this kept me going, knowing that mankind is inherently good.

Struggles lead to reflection. Reflection leads to a fresh perspective. I believe the lessons learned in combat can be applied to everyday life in the United States. The stories of veterans who could not tell their stories need to be told. This is one of my missions.

Mr. Subhash Katial of Barrington Hills, IL, who has had a long career in the insurance business, sent us his story: (Standing, from left) My sister Kamal, myself, my brother Ashok, my sister Neelam and (sitting) my parents, R. N. Katial and Shakuntala Katial.

“This family picture was taken in 1971 at my graduation, one year before I left for the US.

When I landed in New York some 37 years ago I was twenty years old . The West had started to fascinate me and soon going to America became an obsession! I sold my Vespa scooter, bought my plane ticket and took off! My family was heartbroken, they tried to convince me but I had made up my mind.

Flushed with happiness, I arrived in NY City on a cold, dreary, wet afternoon, armed with a $ 600.00 personal check from a cousin residing in the US and a promise from a friend that he will pick me up at Kennedy Airport. A trunk full of clothes and the $8 safely tucked in my wallet, I walked out of the airport into the land of opportunity, land of my dreams and hopes! My friend did not show up, starving, I had to use part of my $8 dollars as no one wanted my $600 check! My first meal in the US, 2 boiled eggs and a beer Such was the freedom of being in the West! My first beer! Finally found my way to the YMCA with the help of a cabby. At the YMCA I stayed for over a week for $10 a day sharing a small room with a Desibhai / Sardarji. There was no dearth of work; I became a free lance draftsman for an architect. It was exhilarating to be able to make $20 a day!

The insurance industry intrigued me. I became a Recruiter/ Insurance Agent for New York Life and would walk miles, store to store and talk to one and all to try and make a sale. Hard work pays, I found myself as the first non-white General Manager in the prestigious New York Life Insurance Company! This is a picture of me as General Manager/Managing Partner taken in the mid 1980s. My office spanned the entire two floors of the Empire State building and hundreds of agents worked and learnt my techniques of selling. By now I had earned my CLU and ChFC. My passport photo, taken when I was 20 years old.

My real dreams came true when God brought my wife Nikita in my life. Today I am a happily married man with two beautiful kids. I have achieved my dream and am living it everyday. No regrets, I am glad I bought that ticket almost 35 years ago. It was and still is a tough journey but one I love and chose!