In collaboration with the Indo-American Center (IAC), IAHM helped conduct a timely essay contest inspired by the April 2011 Chicago visit of the former President of India, Dr. A.P.J. Abdul Kalam. Contestants were invited to submit essays on a present-day example of environmental degradation and the scientific research needed to promote awareness of its consequences.

PROGRAMS WITH THE CHICAGO CULTURAL ALLIANCE Participants engage in discussions on identity in the Maori House at the Field Museum.

Talking About… Identity A cross-cultural discussion in partnership with the Cambodian American Heritage Museum. Participants viewed a thought-provoking exhibit by Kip Fulbeck: Part Asian, 100% HAPA at the Field Museum and engaged in a discussion on identity in America.

Talking About… Im/migration  An internal community discussion on Im/migration at the Levy Senior Center in Evanston. Individuals from all generations discussed why they came to this country and stayed.

“Gateway to India”  A tour exploring the Indian American footprint in Chicago beginning with Swami Vivekananda, developed as part of the  Community Showcase series for the City of Chicago’s “Bold Plans, Big Dreams” Burnham Plan Centennial.

Past Programs with Other Ethnic Organizations 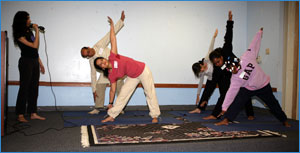